Zino: From The Streets To The Stars

Supa Group is a cohort of 5 Gen-Z artists consolidating on the territory claimed by the Alte movement as a viable alternative to the by-the-numbers afropop movement that preceded them. Chosen for their distinct but complementary approaches to the music business and their individual successes, Clout Mag celebrates the collective power of a new movement that has married the subversiveness of the alte-generation with commercial viability of Naija music’s Golden age, producing a hybridized template for what it means to be a pop star in 2021. This is our profile of our rebel, Zinoleesky. 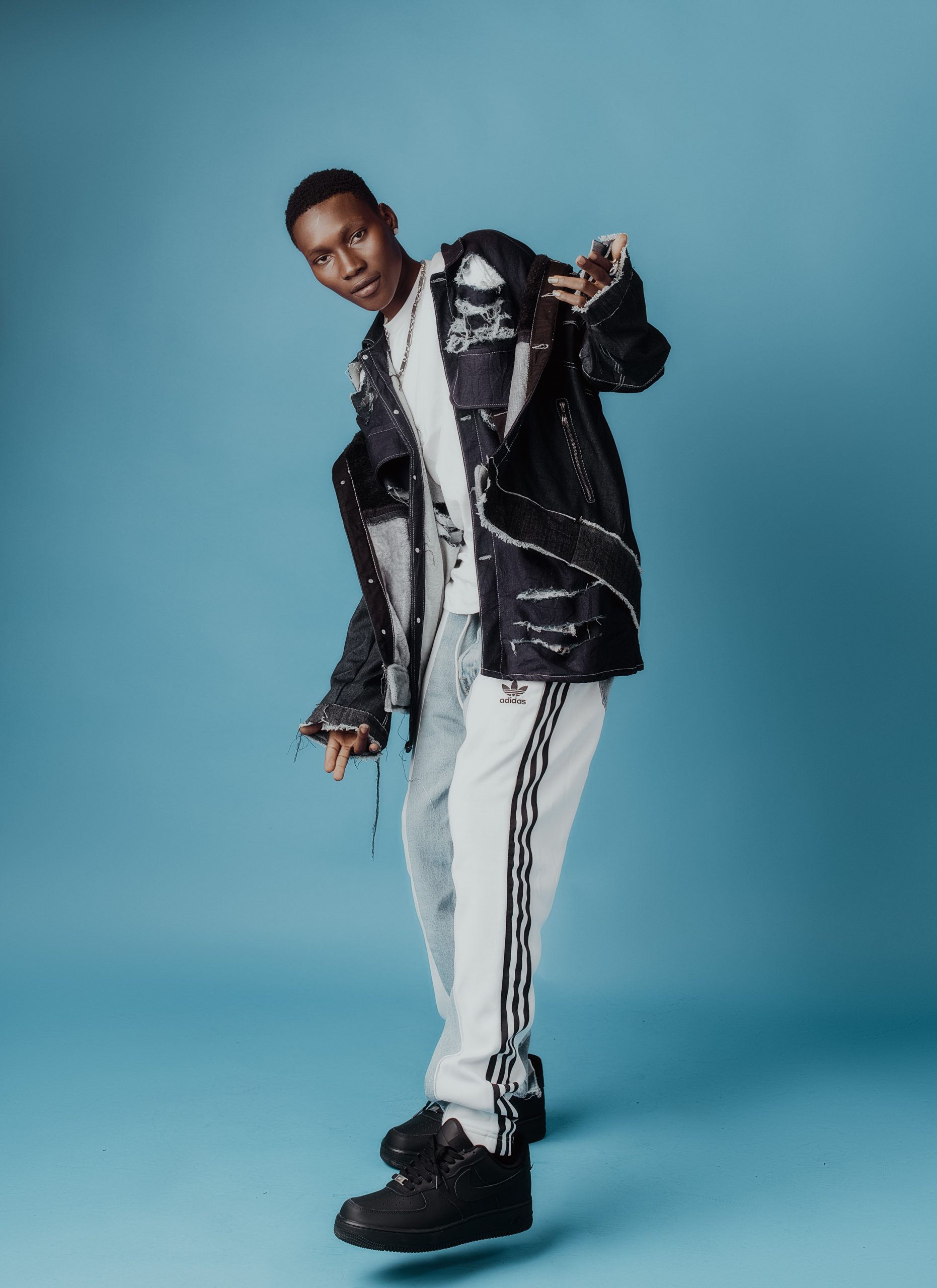 Zinoleesky has range and he knows it. As we set up for our conversation at the outdoor lounge of the Clout studio, Zino, the latest heavy hitter out of the star-studded Afropop label, Marlian Music rummages through his bag for what turns out to be his favorite green plant. He arrived at the venue for the Clout Mag shoot wearing a black ski mask, a purple leather jacket with matching pants, diamond studded earrings and gold grillz that gave some edge to his charming smile as he casually rolled himself a joint.

“I listen to anything that basically catches my attention. It can be anything whether gospel music or Fuji or hip-hop. Anything,” he says coolly, when I tried to piece together the influences behind his chameleonic sound. “You just have to listen to me cause I basically have my own sound and nothing else sounds like me.”

The 25-year-old moves with a silent confidence that acts like a filter, enhancing everything he does, and especially in his music. His latest single, “Naira Marley” is a tongue-in-cheek homage to his label boss, Naira Marley and a bold refutation of the haters — a way of staring down the people who have talked shit about him and celebrating his growing popularity since he released his debut project, Chrome in 2020. While he had already experienced fame from his freestyle videos that first went viral in 2019, the 6-track EP established Zinoleesky as an authoritative voice on the Nigerian experience, a distinct blend of sorrow and hope that powers the average Nigerian as they cautiously face adversity in the world and try to create a better life.

Many young Nigerians today are struggling to reject the limitations that society has set on their lives and have found inspiration in the self-assured lyrics that make Zinoleesky’s music so impactful. Produced by Niphkeys who also produced his hit single, “Kilofese”, “Naira Marley” is similar in nature to Zino’s previous music but feels a bit more evolved as he has his eyes set squarely on freeing his family from financial ruin and situational strife, charging wide-eyed and fully armored into the opposition’s violent attempts to curtail his plans. And from the fury with which he sings, you can tell he means every word of it.

My music can always go a different direction, But basically, I’m a street artist and I make music to let other street boys know that they can achieve anything they want as well. Obviously, motivation is my goal.

There’s a feeling of invincibility exemplified by the optimistic nihilism that has become associated with the street-hop sound pioneered by Zinoleesky’s label boss, Naira Marley. It has created a space where there is permission for others to vent about some of their experiences and share gems that they learned from life’s painful and tricky lessons. They’ve boldly reclaimed vulgar street slangs and demystified the stigma around being from the street. This mood is infectious and it’s part of the reason why Zinoleesky’s voice is as inescapable as an ambulance siren right now.

“Say they wan drag me, I no move/ They wan fight me, dem no fit/ Now, I’m dancing for no reason…”

Zinoleesky’s anthemic music blasts from car windows and dance club speakers, echoes through university hostel lobbies and shoots over outfit montages and dance videos on Instagram and TikTok. His songs have been a mantra for most of the pandemic and the fans are clearly invested. The music video for “Naira Marley” garnered over a million views on YouTube in just 2 weeks and it’s certain he’ll get featured on a lot of concert setlists as music festivals resume from the pandemic imposed lockdown that kept us from experiencing our favorite songs on live stages.

In many ways, Zino’s story is pretty straight forward: a street cat from Agege, Lagos who loved music just as much as the next guy and developed a passion for making music by writing his own lyrics on paper and performing it for friends. After being convinced by his friends in secondary school that he had what it took to make it as an artist, he found producers and started recording his own songs. So Oniyide Azeez became Zinoleesky, nicknamed by friends who named him after a movie’s heroine, Zino because they both had the last alphabet, Z in their names.

He was able to build a devoted fanbase by sharing his music on social media. That visibility eventually caught the attention of Nigerian music industry tastemakers like Davido, Olamide and Naira Marley. But Naira Marley took things a step further and signed Zino to his Marlian Music label in December of 2019. “It just felt like something I had to start doing. I saw my friend, Lil Fresh doing it first. I didn’t really have anything to share on Instagram till I started dropping my stuff there,” he says when I asked what motivated him to post his freestyle videos on Facebook and Instagram. Now, his stardom affords him the luxury of sharing even the most mundane life events—example: He shared a video holding wads of cash and captioned it; “abi make I go flush am like Kodak Black ni?” referencing the American rapper’s Instagram challenge for throwing thousands of dollars into the lake and into his toilet.

Such showy flex notwithstanding, Zino is gentle and soft spoken in person. Interviewing him is like catching up with an old friend. He listens patiently to my questions and disarms with a smile  when he answers. But despite his street savvy lyrics, gold grillz and tattoos sprawling across his skin, Zinoleesky doesn’t come across as a menacing figure. In contrast, he is surprisingly spiritual, taking turns at intervals to thank God for directing his path and mentions that he prayed before accepting the offer to join Marlian Music. His courteous attitude is undoubtedly a manifestation of his traditional Yoruba upbringing and the influence of his parents who he admits are also responsible for exposing him to fuji music since he was a child.

“My dad really loves Wasiu Ayinde and he played it a lot,” says Zino. “It wasn’t like I liked it then, but as I was growing up, I had to listen to it and now when I hear it by myself I get very inspired. My mom loved Pasuma a lot so I just listened to his songs and I loved Pasuma from the start.” Though he now has a more diverse music palette that included hip-hop and afropop, all his influences have edged him toward the centre of Nigerian pop-culture conversation today, and his parents are very proud because he makes the type of music that they can still understand and relate to.

“It’s crazy when you make music and your parents know all your lyrics,” he says with a big smile.

Zino floats through the motions of getting ready for the shoot, changing into a denim jacket celebrity stylist, Soft made for his second Clout Mag shoot. He greets everyone as he breezes through the lobby and finds his way to the photo studio where Mavin singer, Ayra Starr is  rounding up her photo shoot session. The two share a brief embrace before photographer, Sogie starts shooting the pair in their matching denim attires that offer a glimpse at how the two rising artists’ styles can sync up if the two featured on a record. Side by side, their charming smiles make for a beautiful visual, while their synchronized outfits guarantee for statement-making pictures. He seems to wish her all the best as he fistbumps her on her way out, and given her well received projects, ‘Ayra Starr’ and ‘19 & Dangerous’, she’s a shoe-in for the coveted Headies’ Rookie of the Year award which Zinoleesky was also nominated for last year.

Despite his career accomplishment as one of the most promising young artists in Nigeria’s booming music scene, Zino doesn’t hesitate to sing the praises of those who have been instrumental to his success.

He (Naira Marley)’s a very great person, you can learn a lot about life and different things apart from music from him.

“When you have someone like Naira Marley on your team and he has your back, you have a lot to learn,” says Zino. “He(Naira Marley)’s a very great person, you can learn a lot about life and different things apart from music from him.”

Although he says his favorite song right now is Naira Marley’s “Drug Test”, he confirms he never tries to sound like his label boss. “I just make songs that I’ll like myself,” he explains. “I also put my fans into consideration and make music that lets people know that you can achieve anything when you work towards it. No matter who you are and where you come from, you can get anywhere and be anything you want to be.”

To spend a day with him is to revisit the unbridled energy of your teenage years. Give him a gamepad and put on his favorite video game, FIFA and he’s basically in heaven. Gaming helped him cope with the stress of being confined indoors during the pandemic. He jokes that though he’ll compete in “music olympics” before competing in any “gaming olympics”, he’s still “crazy good” at playing football, tennis and snooker. As a product of Nigeria’s public school system which he describes as an “Unserious place to be”, Zino is the perfect posterboy for the street-hop movement happening in Nigerian music today. He doesn’t shy away from addressing the dire situation on the street with his intuitive songwriting, salting the danger with bravado and playfulness; “I got two shot guns in my pocket just to make sure I’m okay,” he sang on one of the tracks on his last EP, ‘Chrome’.

What Zinoleesky will be doing 10 years from now is anyone’s guess. “By then, I’ll have my own label too and have artists signed to me.” he tells me. Watching him now as he poses for his pictures while singing along to every word of the YoungBoy Never Broke Again track he’s playing from his phone’s music library, you can’t help but root for him. He has come a long way to secure his place as the next street-hop.