Clout Africa Awards/2022 was a virtual event. It aired on all Clout Africa’s social media pages at 6:00 PM on Monday, 2nd of April. Tolani Baj and VJ Adams were the show’s hosts and the witty media personalities entertained viewers with engaging award presentations and jokes. 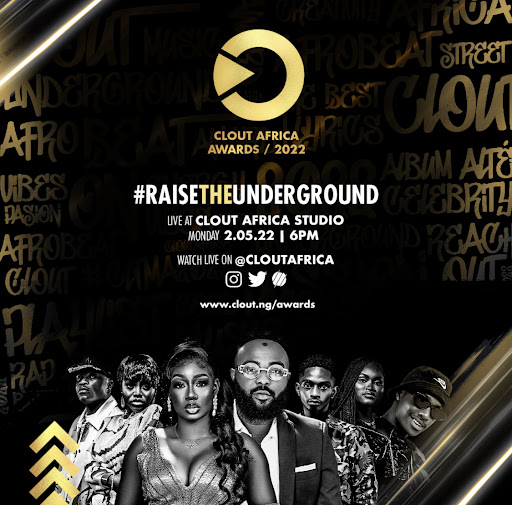 Viewers were also served some exciting live music performances from rising talents like Sydney, Daiverse, Reabel, Gyakie and South African hitmakers, Ch’cco, Mellow and Sleazy. Each of the performing artists has had their own success this year and Gyakie got represented among the winners at the show.

Victony racked up the most nominations as he emerged as a potential winner in 3 categories. Sadly, he was unable to bag any of the awards, losing out at the final stage where fans were encouraged to visit clout.ng to decide the winners.

The secret ballot votes were announced during the live broadcast but you can check out the full list of nominations and winners below.

Nominations were shortlisted by the Clout Africa Award committee alongside specialist jury panels of industry experts from across Africa. Pheabian Miller, the chair of the Clout Africa Award committee said, “The nominees showcase some of the most diverse and exciting line-ups of creatives, artists, producers and DJs in Africa. These acts have created powerful songs that are captivating audiences across the continent and internationally. They’ve highlighted our storytelling culture and sound.”

Commenting on the list of nominees, the head of Business Development, Kolapo Oladapo said that “After the record-breaking last few months that music of African origin has had, it’s no surprise that we have such a spectacular line-up of nominees. The Clout Africa awards is here to showcase to the world what talents our industry has to offer.” The chief brand officer, Dotun Kayode also added that “It’s an incredible reflection of the high caliber of African talents and producers and storytellers and creatives we have in our continent. We are proud to acknowledge and reward their great achievements.” Clout’s Head of Partnerships and Comms, Blessing Manafa also added that “It’s amazing to see that beyond just listening and loving the projects music artists put out, fans have the power to reward who has impacted and resonates with them the most. The winners of every Clout Award category are all deserving!”

Speaking on the decision to make Clout Africa Awards 2022 a fan-voted affair, Clout’s CEO, Serge Noujaim said; “Clout Africa Awards is about raising the underground and bringing you the hottest music award show in Africa where the fans are in control. We’ve been a big part of African music’s growth, providing top-of-the-line recording studio equipment and media services for both established and upcoming acts. Over the past few months, they’ve been busy listening, deliberating and shortlisting the very best of African music creators for the Clout Africa Awards 2022 across 10 categories. If you love them, we honor them.”

See the full list of nominees and winners below.

DJ of the year

Revelation of the year

Producer of the year

Creator of the year

Songwriter of the year